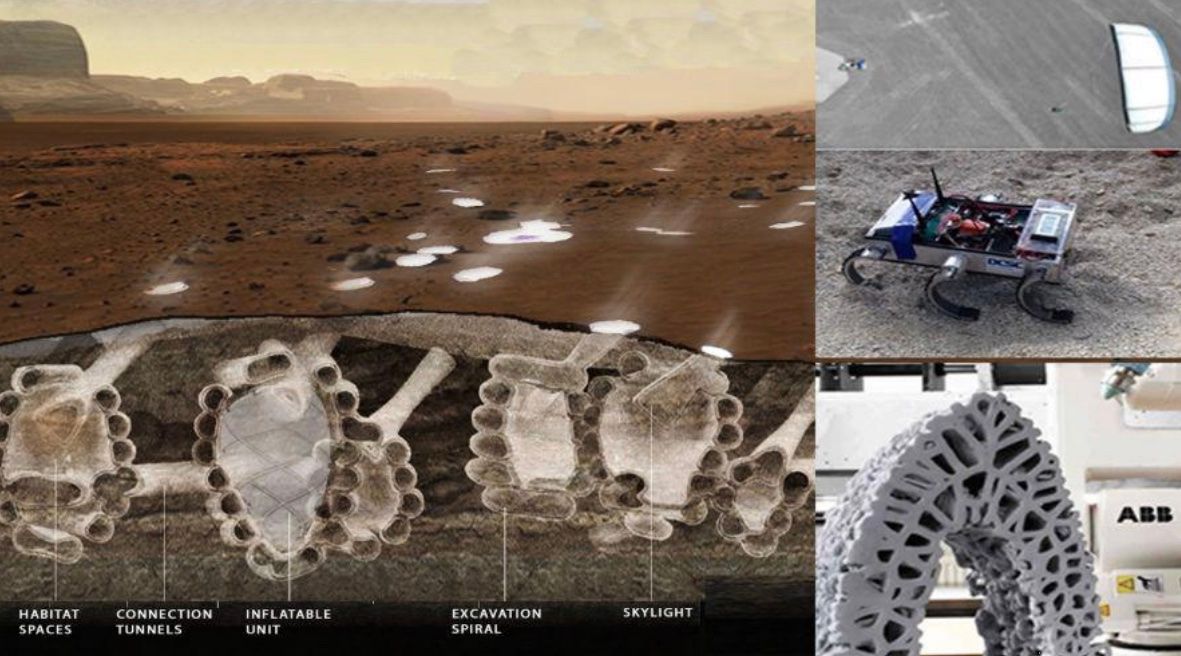 Swarms of robots might dig underground cities on Mars

Underground habitats have recently become a focus of off-planet colonization efforts. Protection from micrometeorites, radiation, and other potential hazards makes underground locations desirable compared to surface dwellings. Building such underground structures presents a multitude of challenges, not the least of which is how to actually build them. A team of researchers from Delft University of Technology (TUD) is working on a plan to dig up material and then use it to print habitats. All of this would be done with a group of swarming robots.

The idea comes from a grant opportunity published by the European Space Agency. The students of the Robotic Building Lab (RB) of the TU Delft under the direction of Dr. Henriette Bier were thrilled to take part in the challenge, which focuses on in-situ resource use for off-earth construction. The RB team, together with experts from the fields of materials science, robotics and aerospace technology, submitted an idea that was endowed with 100,000 euros in order to develop a preliminary proof of concept.

The proposed approach focuses on the laboratory’s specialty – building robots – and consists of four main components: digging out the regolith, printing a new habitat using an additive manufacturing process, coordinating the work between all the robots that would be required to get the job done, and drives them as well as the living space.

Robotic excavation of regoliths has been studied before, but usually in the context of the moon. Different excavation patterns are useful for building different structures, and the pattern the RB team focused on was a downward spiral. Such a structure could create a stable, secure structure on a relatively small footprint on the surface.

Example of some of the subtractive toolpaths that are used to hollow out the tunnels of habitat.
Photo credit: Bier et al.

Modeling the stresses on this structure is a key component of the current study project. The team developed a prototype of a 1m x 1m fragment with patterns that can be used to effectively create safe and stable areas. Some of these areas have been designed with housing in mind, including removable plant areas that can accommodate hydroponically grown plants.

Tons and tons of regolith would have to be removed from any real excavation site. This regolith is used as a material for 3D printing a stable living space. The team originally planned to combine regolith with liquid sulfur to make concrete. After engaging materials scientists and an industrial partner specializing in robot printing with cement, they decided to use cement-based concrete by tapping into some of Mars’ water resources. However, making cement itself requires infrastructure, so such a plan to use regolith would have to wait until that infrastructure is already in place on the planet.

Video discussing how the swarm method can be implemented to aid the exploration of Mars.

The structuring of the living space itself also plays an important role in the design of the 3D printing form. The team focused on relatively porous structures, which allowed less material to be used in construction. However, the structures still had remarkably high strength and durability, and also provided good insulation against radiation and micrometeorite impacts that the underground colony is trying to avoid.

Some of the benefits of this approach can be traced back to one of the greatest drivers of innovation – collaboration. The project is coordinated by the RB laboratory, but involves partners from both TUD and external trading partners. These employees bring expertise in the fields of construction, aerospace, robotics and additive manufacturing technologies to develop the robot swarm construction approach.

An example of the “rhizome” habitat, which would have a relatively small exposed area on the surface but would offer a large habitable space underground.
Photo credit: Bier et al.

These employees will have to work together for a long time so that this project can finally be implemented on Mars. As a technology demonstrator, there is still a long way to go before it can even be accepted as a mission concept. Dr. Bier and her team hope to advance the concept further and are looking for future funding opportunities as part of this development path.

With a bit of luck, swarming robots and 3D-printed cement-based living spaces will play a key role in the future development of a previously only science fiction city – an underground city on Mars.

Mission statement:
Concept of an underground habitat and the robots and energy sources that build and power it.
Credit – Bier et al.

NASA’s Webb research how the radiation explosions of huge…

Swarms of robots might dig underground cities on Mars

Day by day US information on Could 21st

Why Asian Individuals on Wall Avenue are breaking their…