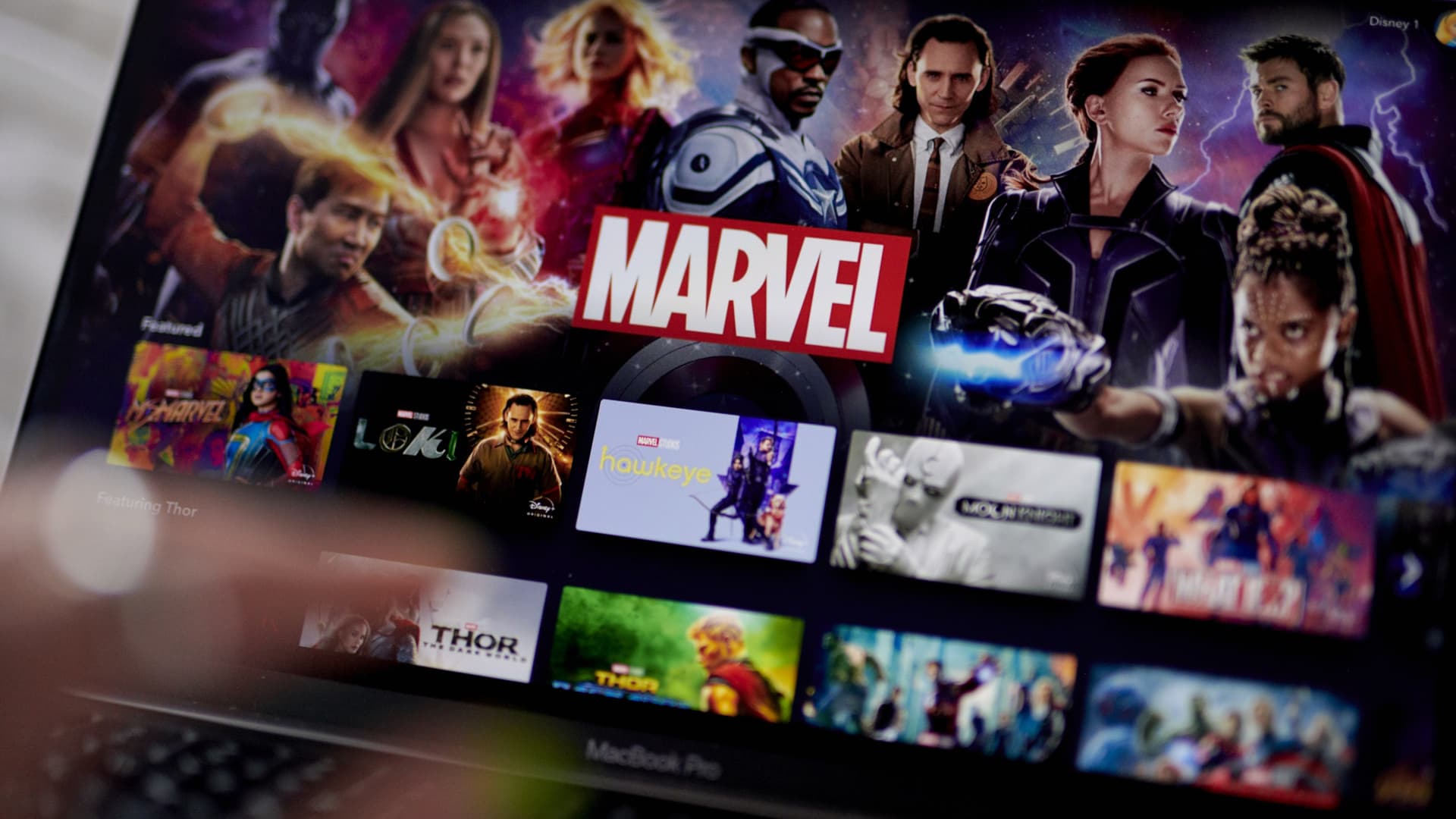 The Disney+ Marvel website launch screen on a laptop computer in the borough of Brooklyn in New York, United States, on Monday July 18, 2022.

Kevin Feige, head of Marvel Studios, teased that his team has a plan for the next decade of Marvel’s cinematic universe, planning to add the Fantastic Four, X-Men and Deadpool to the mix of already established Marvel heroes.

Here’s a breakdown of what audiences can expect from Disney’s Marvel Studios in the years to come:

Kevin Feige, head of Marvel Studios, began his portion of the D23 Expo panel with a rendition of “I Can Do This All Day” from Rogers: The Musical, which appeared on the Disney+ series Hawkeye.

Ryan Coogler, the director of Black Panther: Wakanda Forever, brought footage from the film, which is slated to hit theaters on November 11. The clips showed Queen Ramonda chastising the UN for trying to steal Wakanda after vibranium killed T’Challa.

The footage showcased the power of the Dora Milaje and set the stage for an epic battle against Namor and the Atlanteans.

“I’m glad you’re leaving the theater proud of what we brought you,” said Letitia Wright, who portrays Shuri in the film.

Audiences got a glimpse of Riri Williams in the Wakanda Forever footage, but Marvel also gave a glimpse of the Ironheart Disney+ series, which is still in production. The clips showed Riri building pieces of the Ironheart armor, and Feige teased that the show will focus on the cross-section of magic and technology.

“Ant-Man and the Wasp: Quantumania”

Paul Rudd, Evangeline Lilly and Johnathan Majors took the stage to talk about the upcoming Ant-Man and the Wasp: Quantumania, the first film in Phase 5 of the MCU.

“This thing is bananas,” Rudd said.

“This will be unlike anything you’ve seen from us, let alone this guy,” he said, pointing to Majors, who portrays Kang. “Brings this whole thing into such new territory.”

The footage shows the Lang, Van Dyne and Pym families being drawn into the Quantum Realm and confronting a terrifying new enemy: Kang the Conqueror.

Gael Garcia Bernal and Laura Donnelly star in Werewolf by Night, a special presentation from Marvel Studios coming to Disney+ in October.

Shot entirely in black and white, the film is reminiscent of The Twilight Zone and old monster movies from the 1930s and 1940s. Early footage shown at D23 Expo suggests the film follows a group of monster hunters as they search for a monster among them.

Secret Invasion follows a faction of shape-shifting aliens known as the Skrulls who have infiltrated all aspects of life on Earth. The Skrulls first appeared in 2018’s Captain Marvel, which is set in the ’90s.

Don Cheadle arrived to screen footage from the upcoming Disney+ series full of political intrigue and action. He also teased Armor Wars, a series that will start filming next year.

Feige brought the cast of Loki along to present a teaser trailer from season 2 that promises even more mischief.

He announced that Matt Shakman, the director of WandaVision, will officially direct the MCU’s Fantastic Four feature film.

Echo, a new Disney+ show centered around a deaf female heroine, is set after Hawkeye and makes heavy use of American Sign Language.

Footage from the series shows Vincent D’Onofrio returning as King Pin. Alaqua Cox reprises her role as the title character.

D’Onofrio, who took to the stage to promote Echo, was joined by Charlie Cox to share footage of Matthew Murdock aka Daredevil in She-Hulk. No footage from the show was shown as filming has not yet started. D’Onofrio will appear in the series.

Anthony Mackie returns as Captain America in Captain America: New World Order. He was joined on stage by Danny Ramiez, who plays Joaquin Torres, Carl Lumbly as Isaiah Bradley, and Tim Blacke Nelson as Samuel Sterns, aka the Leader.

Feige announced the team that will be part of Thunderbolts. They include Julia Louis-Dreyfus as Valentina Allegra de Fontaine, David Harbor as the Red Guardian, Hannah John-Kamen as the Ghost, Olga Kurylenko as Task Master, Wyatt Russel as John Walker aka US Agent, Florence Pugh as Yelena Belova, and Sebastian Stan as The winter soldier.

“It tells you everything you need to know about the Thunderbolts when the beloved Winter Soldier is the carpenter among them,” Feige teased.

Brie Larson, Iman Vellani and Teyonah Parris closed the panel with footage from the upcoming movie. Miss Marvel, Captain Monica Rambeau, and Captain Marvel discover their powers are intertwined and the three heroes must be unraveled. Meanwhile, the three continue to switch places accidentally, leading to a few laughs.

The footage shown at D23 Expo was action packed and packed with comedic beats. Plus, everyone’s favorite Flerkin, Goose, will be back for more antics.

What Pupil Mortgage Forgiveness Means for Debtors Who Did not Graduate