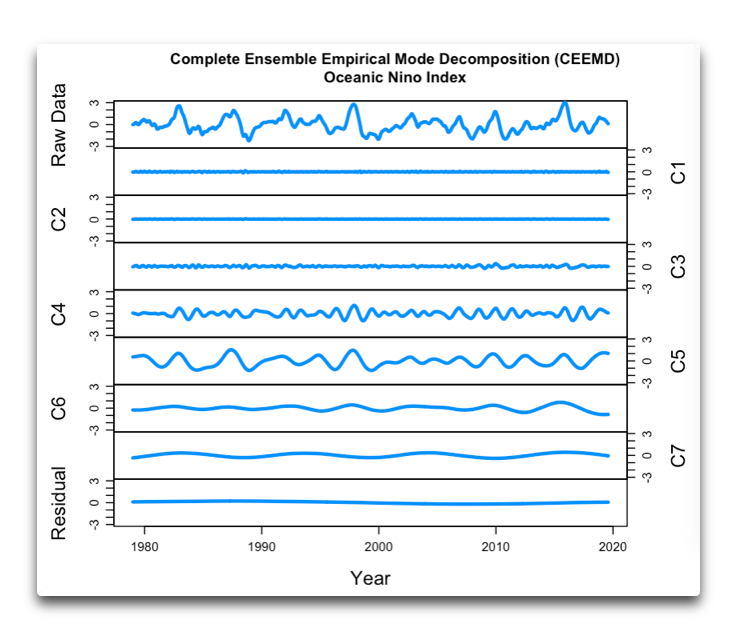 Full Ensemble Empirical Mode Decomposition – Watts Up With That?

As early as 2015, in an article entitled “Noise Assisted Data Analysis”, I described a possibility of breaking down a signal into its underlying components. It is known by the acronym “CEEMD”, hence the title of this post. The most common type of signal decomposition is called “Fourier analysis”. However, it breaks a signal down into regular sine waves, constant signals with no changes in strength or frequency over time.

I find CEEMD much more useful than Fourier analysis because, among other things, it allows me to study the relationship between different climate data sets. To demonstrate how this is done, I would first like to look at the result of a CEEMD decomposition. Here is the CEEMD analysis of the El Nino index called “ONI”, the Oceanic Nino Index.

From top to bottom you first have the ONI raw data. Then you have the underlying signals from the signal group with the shortest period (highest frequency) shown as empirical mode C1 to the signal group with the longest period (lowest frequency) shown as empirical mode C7. At the bottom is the “residual” that remains after removing the empirical mode signals C1 to C7. And when you add all of these together, C1 through C7 plus the rest … you exactly reconstruct the original ONI signal

One of the most powerful uses of CEEMD analysis is that we can see if two or more signals are closely related. For example, Figure 2 below shows empirical mode C5 for a variety of data sets. These include three temperature-based El Nino indices: NINO34, ONI (Oceanic Nino Index) and MEI (Multivariate Enso Index).

Then there is an El Nino index based on the sea level, the SOI (Southern Ocean Index). It is based on the difference in sea level pressure between Tahiti and Darwin, Australia.

There is one atmospheric temperature dataset, the satellite-based tropical temperature of the lower troposphere of the UAH MSU.

Figure 2. Results of empirical CEEMD mode 5 for a variety of data sets.

Interesting result, right? You can clearly see that all of these data sets move in close harmony.

I had to think about it because Matthew Sykes pointed out in the comments on my last post, A Chain of Effects, that the TPW (ECMWF Total Rainwater) data was different from the NPW-TPW data. To see who the outlier is, here are the empirical CEEMD Mode 5 results for three different TPW results – the ECMWF, RSS, and NVAP total precipitation water dataset. The NVAP dataset starts in 1988, so that’s where I started comparing.

Figure 3. Results of the empirical CEEMD mode 5 for three data sets with a total of precipitable water.

As a result, the NVAP record is the clear outlier. It will sync and not sync with the other two, while the other two are consistently in good agreement.

This answers the question I raised and shows the usefulness of the CEEMD analysis. And another MP does not say.

Meanwhile, we’re supposed to get heavy rain all week here on our northern California coastal slope with a tiny view of the ocean from this morning (Tuesday) … keep your fingers crossed. They say it will rain 6.9 cm (2.7 in) today alone, which is not ordinary rain but a frog shrike. Since we’ve only had about 40% of normal rain so far, I can only wish for tropical rain.

The best of this wondrous world for everyone

PS: I like to discuss and defend what I said. However, I cannot defend or discuss what you do superior I said. As a result, that’s what I ask when you comment on it quote the exact words You discuss so that we all know who and what you are referring to.