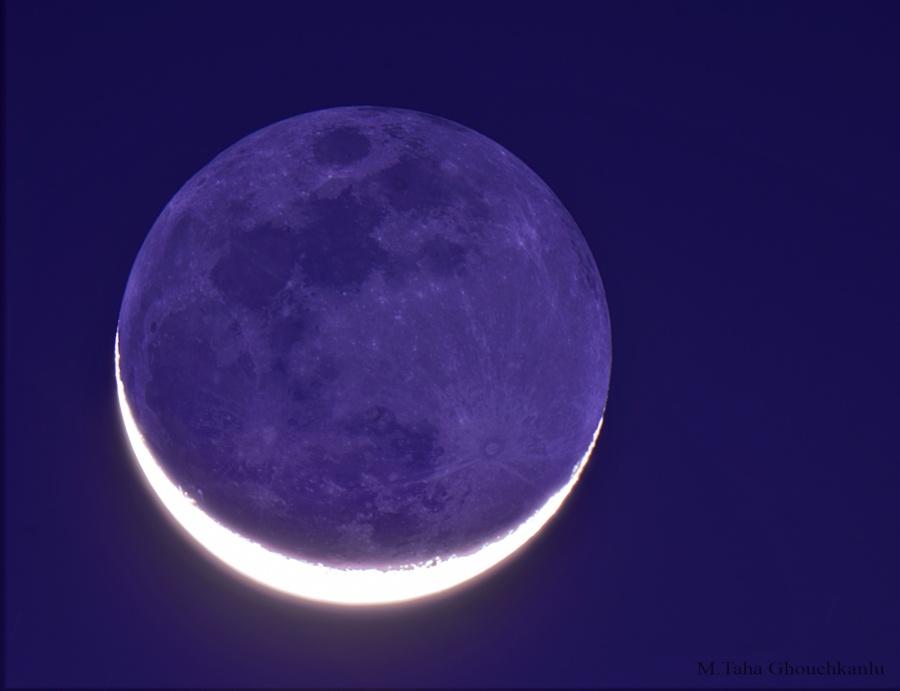 As the earth absorbs a lot of energy from the sun, much of it is reflected back into space. Sunlight reflected from the earth is called earthshine. We can see it on the dark part of the moon during a crescent moon. The Farmer’s Almanac said it was formerly called “the new moon in the arms of the old moon”.

Earthshine is an example of planetary shine, and when we look at the light of distant exoplanets, we are looking directly at their planetary shine without it being reflected off any other object.

If distant astronomers looked at Earthlight the way we glow exoplanets, would the light tell them that our planet is teeming with life?

A number of advanced telescopes will come online in the next few years. Together with the JWST, they will give us the types of images scientists have been eagerly awaiting for decades. Thanks to the ground-based European Extremely Large Telescope and Giant Magellan Telescope, as well as the upcoming LUVOIR space telescope, we will enter an age of directly imaged exoplanets. Scientists must prepare themselves for all of these observations and data so that they are ready to interpret them.

We hope that these future telescopes will allow astronomers to characterize more and more Earth-like exoplanets. But the only way our characterizations of these planets can be accurate is if our models are accurate. Since Earth is the only planet we know to harbor life and the only habitable planet with known properties, it is our only test case and the only resource astronomers have to validate their models.

This is where Earthshine comes in.

For distant astronomers, Venus and Earth could both appear in our Sun’s habitable zone. But their planetary shines are different. We find ourselves in the same predicament when looking at distant solar systems, and polarimetry could help us understand the differences between dead planets and planets that harbor life. Photo credit: Earth image: NASA/Apollo 17 crew. Venus image: NASA

In a new article, a team of researchers looked at how Earthshine can be used to create accurate models of planetary shine. The paper is “Polarized Signatures of a Habitable World: Comparison of Models of an Exoplanet Earth Using Visible and Near-Infrared Earth Appearance Spectra”. The lead author is Kenneth Gordon, a graduate student in the Planetary Sciences Group at the University of Central Florida. The article was accepted into the Astrophysical Journal.

We are discovering a growing number of rocky planets in potentially habitable zones around exoplanets. But to better understand if they are habitable, we need to characterize their surfaces. Astronomers have limited options for doing this, mainly by studying the light emitted by the planets as they pass in front of their star, or by capturing the flow of light directly from the planet.

These methods work for large, gaseous planets. But they’re difficult for rocky planets, and rocky planets are what we’re interested in. Large gaseous planets have bloated atmospheres that facilitate spectroscopic studies. And they emit or reflect more light because of their size, giving them higher flux in direct imaging. However, rocky planets have much smaller atmospheres that are more difficult to study spectroscopically. Because they are smaller, their flux is also lower, making them difficult to image directly.

As our telescopes become more powerful, they will overcome some of these obstacles to characterizing rocky exoplanets. This new paper is part of the astronomy community’s preparations.

In their article, the authors point out how even the mighty JWST is being hampered in its efforts to fully characterize Earth-like exoplanets. Characterizing the atmospheres of these planets around cool dwarf stars requires long observation times. In a previous publication, a separate team of researchers showed that the JWST would need to observe more than 60 transits of one of the known rocky exoplanets TRAPPIST-1 to detect Earth-like ozone levels.

Orbiting a red dwarf star 40 light-years from Earth, this artist’s rendering shows super-Earth LHS 1140b, which could be the new winner of the title “best place to look for signs of life beyond the solar system.” This world is slightly larger and much more massive than Earth and has probably preserved most of its atmosphere. Polarimetry could play a role in characterizing their surface. Photo credit: ESO/M. grain knife

“Using JWST’s near-infrared spectrograph (NIRSpec) and mid-infrared instrument (MIRI) they found that >60 transits for 1b and >30 transits for 1c and 1d would be required to detect present-day Earth
Ozone (O3) levels on this planet,” the authors write. This is a considerable investment in observation time.

The JWST will also struggle with what astronomers call degenerations. “…there will still be a number of degeneracy in JWST’s characterizations of habitable worlds, such as B. the distinction between the optical thickness and the particle size distribution of clouds,” they write.

Polarimetry could be the key to breaking the deadlock between our advanced telescopes and the small, rocky planets we aim to study. It could also reduce the observation time required. “Polarimetry is a powerful technique that can resolve these degeneracy because it evaluates physical aspects of light that are not measured in non-polarimetric photometry or spectroscopy.”

Polarimetry is powerful because it is very sensitive to the properties of exoplanet atmospheres. It has proven its effectiveness in studying our own solar system, including cloud-shrouded Venus. “Polarimetry has helped characterize bodies in the Solar System, including the clouds of Venus and gas giants, and the different ice conditions of the Galilean moons,” the authors explain. Polarimetry has been so effective in studying Venus that some want to build a polarimetric radar to study the planet more fully.

The problem is that astronomers don’t have finely tuned polarimetric models of exoplanets to help them understand what they’re seeing when studying polarimetric planetary shine. Models exist, but they need to be tested and validated with real planets, and that’s where Earth comes in. “To date, Earth is the only known and observed habitable ‘Earth-like’ planet and therefore serves as a benchmark for inferring biosignatures of life as we know it today,” the authors explain.

This image shows the transmission spectrum of an Earth-like atmosphere. It shows wavelengths of sunlight that absorb molecules such as ozone (O3), water (H2O), carbon dioxide (CO2), and methane (CH4). Realizing all four could be a slam dunk that life is there. Image credits: NASA, ESA, Leah Hustak (STScI)

According to the researchers, Earthshine is the key to this. “Studies of optical and near-infrared (NIR) earth-appearance flux spectra reveal diagnostic biosignatures of the Earth, including the vegetation red edge (VRE), ocean glint, and spectral features of atmospheric O2 and H2O.” Other studies have also shown polarimetry’s effective contribution to these can make observations.

The main point of the study was to compare two different existing models that astronomers can use to interpret polarimetry and measure its accuracy. One is called DAP, the other VSTAR. The team used both to interpret their polarimetric data and then compared them.

This number from the study helps explain some of the team’s work and results. Both panels contain simulated polarimetric data from two exoplanet Earths. The image on the left is for an Exo-Earth with no clouds and a forest surface. The image on the right is an ocean planet with a water cloud layer. The left panel compares how the two models detect H2O and the right panel compares how they detect O2. As the pictures show, both models are largely the same. Photo credit: Gordon et al. 2023

This type of research makes it clear how much work is behind scientific endeavors. While astronomy headlines make things sound simple, it’s complicated. There’s a lot more to it than just pointing powerful telescopes at distant objects and then looking at the images. It takes the dedicated effort of thousands of people over decades to make astronomy work. The stakes are high, and if one day a team of astronomers can say, “We did it!” We’ve discovered a planet with life!” it’s going to be like this because of detailed, intricate work that doesn’t generate a lot of headlines.