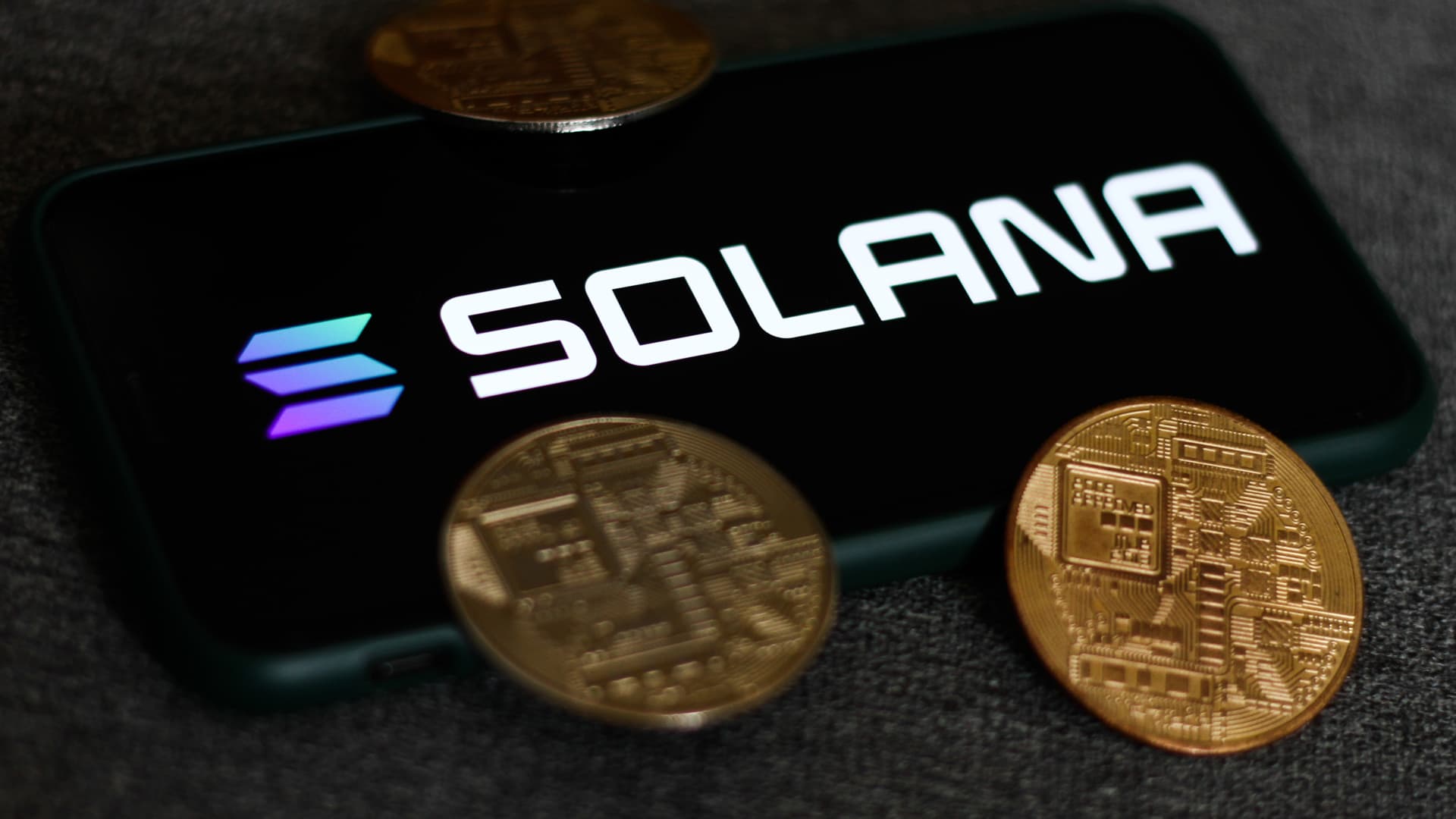 The Solana logo and cryptocurrency representation displayed on a phone screen can be seen in this illustrative photo taken on August 21, 2021 in Krakow, Poland.

Solana was touted as the cryptocurrency that would challenge ether with a greener approach, faster transaction speeds, and more consistent costs.

Investors who took that bet have had a miserable year. The token’s market cap plummeted from over $55 billion in January to just over $3 billion by the end of the year.

Among Solana’s biggest issues in late 2022 was his close relationship with FTX founder Sam Bankman-Fried, who is facing eight fraud charges after his crypto exchange went bankrupt last month. The disgraced former crypto billionaire was one of Solana’s most public supporters, touting the benefits of blockchain technology and investing over half a billion dollars in Solana tokens.

“Sell me anything you want,” Bankman-Fried told a skeptic in January 2021. “Then get lost.”

As of June, Bankman-Fried entities held nearly $1.2 billion worth of the token and associated assets, according to documents verified by CoinDesk.

When FTX broke up, investors bailed out about $8 billion in Solana. But over the past few days, when the rest of the crypto world has been relatively quiet and prices have been stable, Solana has continued to tumble.

Two of the largest non-fungible token (NFT) projects built on Solana announced their migration from Solana’s platform on Christmas Day. But the most recent slides came after this news was already known, making Solana’s most recent slide somewhat of a mystery.

Over the past week, Solana is down over 30%. Ether has held steady, losing 1.7% over the same period Bitcoin fell just 1.2%. Among the top 20 most valuable cryptocurrencies tracked by CoinMarketCap is the second biggest loser on this track Dogecoinswhich fell by 9%.

In just one hour of trading on Thursday, Solana slipped 5.8%, hitting its lowest level since early 2021, around the time Bankman-Fried began vocalizing his support for the project.

Solana has since broken out of the lows, with a market cap of over $3.5 billion. 24-hour trading volume is up over 200% in relative terms.

During the crypto market heyday of 2021, Bankman-Fried was not alone in his bullish move.

Using consensus mechanisms, blockchain platforms assess the validity of an executed transaction, tracking who owns what and how well the system is performing based on a consensus among multiple record-keeping computers called nodes.

Bitcoin uses a proof-of-work mechanism. Ethereum and rival Solana use proof-of-stake. Rather than relying on energy-intensive mining, proof-of-stake schemes require large users to offer collateral or stakes to become “validators.” Rather than looking for a cryptographic hash like Bitcoin, proof-of-work validators verify transaction activity and maintain the “books” of the blockchain in exchange for a proportional reduction in transaction fees.

Solana’s alleged differentiating factor was supplementing proof-of-stake with proof-of-history — the ability to prove that a transaction happened at a specific point in time.

Solana surged throughout 2021, with a single token gaining 12,000% over the year, reaching $250 by November. But even before FTX collapsed, Solana faced a series of public battles that challenged the protocol’s claim that it was a superior technology.

Much of Solana’s popularity stemmed from the growing interest in NFTs. Serum, another exchange supported by Bankman-Fried, was built on top of Solana. As the calendar swung to 2022, Solana’s limitations began to become apparent.

Barely a month into the year, a network outage crippled Solana for over 24 hours. Solana token fell from $141 to a low of just over $94. In May, Solana experienced a seven-hour outage after NFT mining flooded validators and crashed the network.

A “record-breaking four million transactions [per second]’ took Solana out and dropped its token’s price by 7%, CoinTelegraph reported at the time, pushing it further into the red during the bloody start of the crypto winter.

In June, another default resulted in a 12% drop. The hours of downtime came after validators stopped processing blocks, crippling Solana’s touted consensus mechanism and forcing a network restart.

The outages were worrying enough for a protocol looking to reverse ether dominance and assert itself as a stable, fast platform. Solana has had growing pains in public. The project was first built in 2020 and is a younger protocol than Ether, which went live in 2015.

Technological challenges are to be expected. Unfortunately for Solana, something else was brewing in the Bahamas.

The SEC called it a “brazen” scam. Bankman-Fried’s use of client funds at FTX to fund everything from trading and lending at his hedge fund Alameda Research to his lavish lifestyle in the Caribbean has roiled the crypto markets. Bankman-Fried was released for $250 million Bond last week while awaiting trial on fraud and other criminal charges in the Southern District of New York.

Solana since November 2022, the month FTX failed and filed for bankruptcy protection.

Solana lost more than 70% of its total value in the weeks after FTX filed for bankruptcy in November. Investors fled anything associated with Bankman-Fried, with the prices of FTT (FTX’s native token), Solana and Serum falling dramatically.

Yakovenko did not immediately respond to CNBC’s request for comment.

Worst of all has been the FTT, which has lost virtually all of its value. But Solana has seen sustained flight over the past few days, reflecting ongoing concerns about FTX contagion and skepticism about the long-term viability of its own protocol.

Developer flight is the most urgent problem. Solana’s raison d’être, according to developer documentation, was to solve Bitcoin and Ether’s struggle “to scale beyond 15 transactions per second globally.” However, according to Token Terminal, active developers on the platform have dropped to 67 from an October 2021 peak of 159.

Multicoin Capital, a cryptocurrency investment firm, has maintained a bullish stance on Solana. Even after FTX imploded, Multicoin continued to strike a bullish tone on the suddenly ailing blockchain.

“We recognized that given its affiliation with SBF, SOL is likely to underperform in the near term
and FTX; however, since the crisis began, we have chosen to hold the position based on a variety of factors,” Multicoin wrote in a message to partners received from CNBC.

Multicoin and other prominent crypto voices claim that the fallout from FTX underscores the need for a return to basics for the crypto industry: a transition away from centralized juggernaut exchanges and toward decentralized finance (DeFi) and self-custody.

A surge in daily activity at the now peerless Binance could indicate that many crypto enthusiasts have yet to take this writing to heart.

Not surprisingly, Yakovenko continues to believe in Solana. But even Vitalik Buterin, the man behind Ethereum, expressed his support for Solana on Thursday. “Hard for me to say from the outside, but I hope the community gets its fair chance to thrive,” Buterin wrote on Twitter.

Chris Burniske, a partner at Web3 venture capital firm Placeholder, said in a Dec. 29 Twitter thread that he still longs for Solana.

Crypto saw mass adoption thanks to centralized platforms like FTX, Crypto.com, and Binance. FTX has spent millions of dollars on stadium deals and naming rights. Crypto.com invested heavily in prominent advertising campaigns. Even Binance announced a sponsorship connection with the Grammys.

2023 could prove to be a landmark year for Defi as crypto-curious investors look for safer ways to earn returns and store their assets. Bitcoin was born out of the 2008 financial crisis. Now the cryptocurrency industry faces a test of its own.

– CNBC’s Ari Levy and MacKenzie Sigalos contributed to this report.

5 taxes, funding adjustments that would enhance your funds in 2023