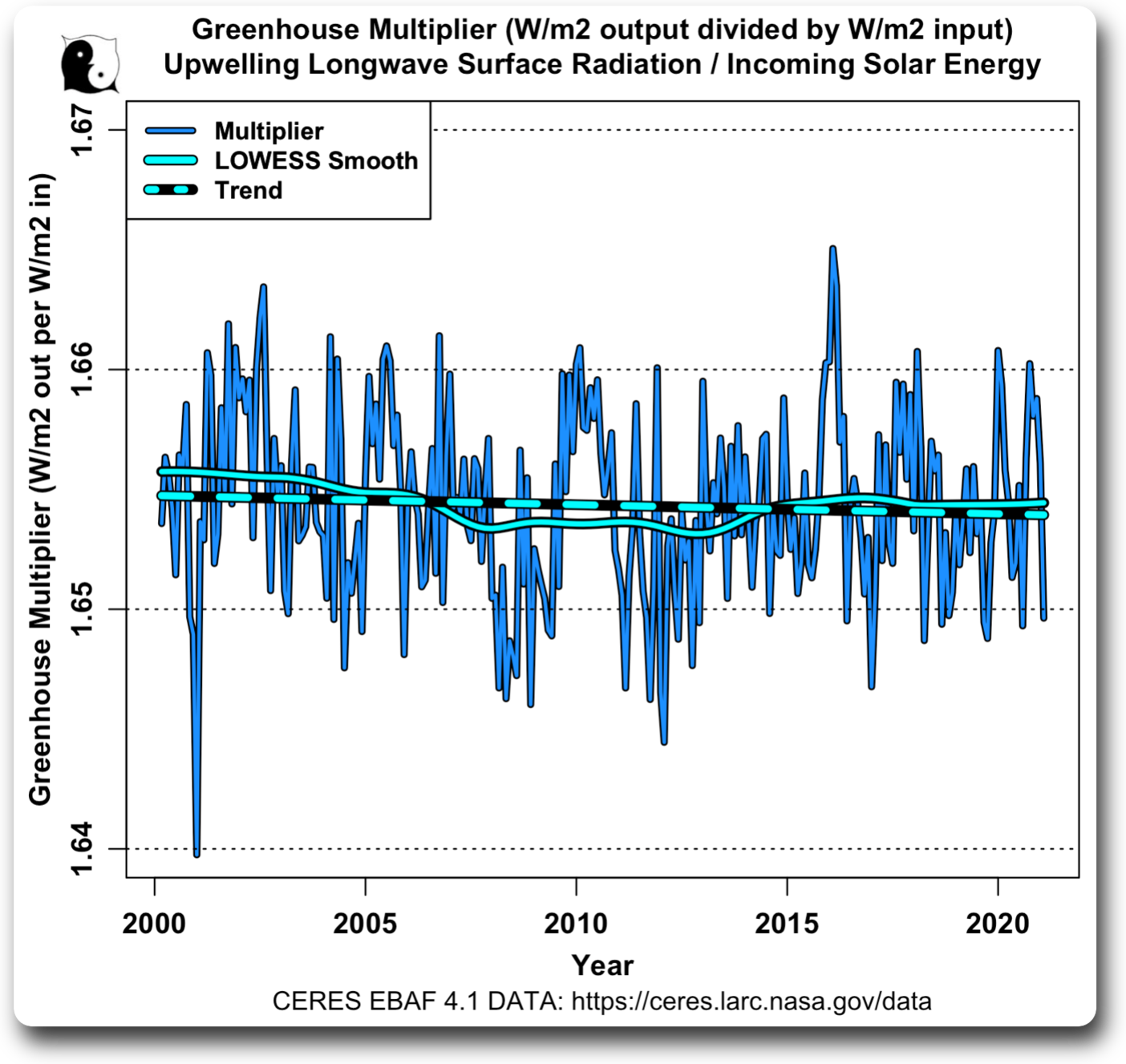 The multiplier – watts with it?

This is a continuation of my previous post titled Greenhouse Equilibrium. If you haven’t read it yet, you might want to check it out as it introduces many of the concepts I will be discussing in this post.

I had to ponder the oft-repeated claim that a doubling of CO2 increases the radiative forcing of the upper atmosphere (TOA) by 3.7 watts per square meter (W/m2)… and that in turn by an additional 3.7 W/m2 of the TOA -Drive causes ~3° increase in temperature. In other words, they say that ~1.2 W/m2 of additional radiative forcing causes one degree of warming.

What got me thinking was the Stefan-Boltzmann equation. It relates the temperature to the amount of thermal radiation emitted. It turns out that the radiation varies with the fourth power of the temperature T4. This means that the warmer an object is, the more energy must be supplied to the object to raise the object’s temperature by each additional degree.

So how much extra energy is required to raise the Earth’s temperature (which is around 15°C) by one degreeC?

Now recall their claim that 1.2 W/m2 TOA drive causes one degree of warming…which in turn requires 6.5 W/m2 at the surface.

Presumably their claim is that different feedbacks amplify the change in radiative forcing. But converting 1.2 W/m2 at the TOA to 6.5 W/m2 at the surface? That’s a neat trick. I don’t see that at all.

Now let me return to a graphic from my previous post, along with the caption.

Figure 1. Greenhouse multiplier. The multiplier is calculated as the rising long-wave surface radiation divided by the incoming solar radiation (after albedo reflections). A multiplier of 2 would mean that the surface would radiate two W/m2 of energy for each W/m2 of solar energy actually entering the system. This shows that the greenhouse increased the insolation measured at the surface by about two-thirds.

Now, over the period of the CERES record, the greenhouse effect increased by about 0.7 W/m2.

This allows us to see what the change in greenhouse efficiency shown in Figure 1 should look like when the absorbed surface radiation is increased by 3.8 W/m2. Figure 2 is the same as Figure 1 but includes the change expected from the additional 3.8 W/m2 absorbed.

Figure 2. As in Figure 1 but including the trend in the multiplier that would be expected from increasing TOA greenhouse gas forcing.

First, I just don’t believe their numbers. Their claim is that a doubling of CO2 gives an additional 3.7 W/m2 at the TOA and leads to a surface warming of 3°C. That’s about 1.2 W/m2 per degree warming.

But we know that it takes 6.5 W/m2 to raise the Earth’s temperature by one degree…

Second, even if the warming were only 1°C per CO2 doubling, we could still see it on the graph. Figure 3 shows this result.

But we don’t see this lower trend in the multiplier either. Instead, the multiplier has a slight but not significant decrease, and it’s not what we would see if rising greenhouse gases actually increased surface temperatures.

However, at least this lower trend is somewhat believable as the increase from TOA to surface is from 3.7 W/m2 to 6.5 W/m2. Still a long reach… it would require strong positive feedback and I haven’t seen that anywhere.

Now it’s important to remember that this measurement of the efficiency of the system is an end-to-end measurement. By this I mean we start with the energy entering the system (minus solar reflections) and we end with the surface temperature.

Between the sun and the surface of the earth we have a series of emerging climate phenomena. These include, but are not limited to, variable shortwave and longwave radiative effects from clouds, changes in surface albedo and TOA albedo, massive variable energy advection from the tropics to the poles, changes in aerosols, the La Nina/El Nino pump, variations in timing and in the Thunderstorm strength, variations in sensible/latent heat loss from the surface… and changes in greenhouse gases.

And what seems to be happening is that, as I’ve been saying for years, the changes in greenhouse gases will be counteracted by a combination of the other emerging climate variables listed above.

What a wonderfully complex world we live in!

PS—As with the previous post, please stay on topic. Claims that the greenhouse effect is not real or that there is no downward radiation have no place in the comments section of this post and are frowned upon from high altitude. You are more than welcome to discuss these topics… just not in this particular post.

my usual—I can defend my own words. I cannot defend your (mis)interpretation of my words. Please QUOTE EXACTLY THE WORDS you are discussing in your comments so we can all understand who and what you are responding to.

After a year-long stoop, shopper buying energy shall be again in 2023